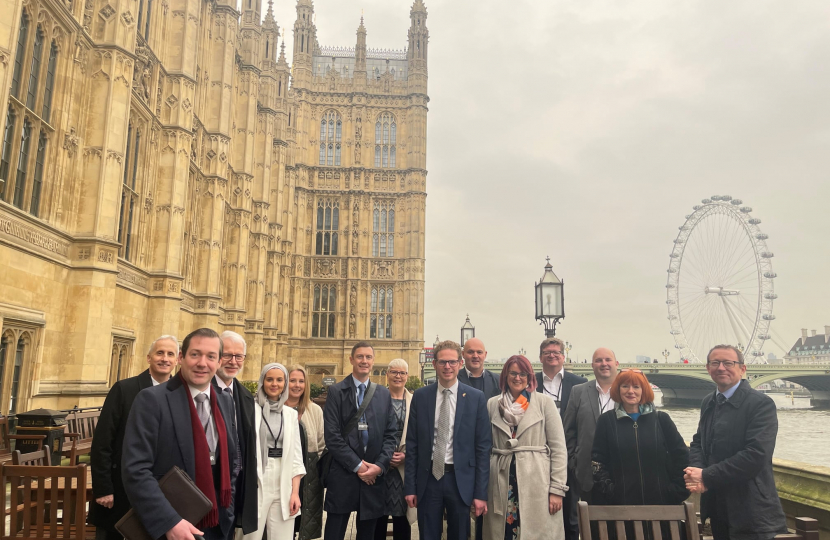 This week, the Staffordshire Chambers of Commerce and Jack Brereton MP where pleased to welcome local businesses and organisations into the Houses of Parliament.

Staffordshire Chambers of Commerce has more than 1,200 member businesses across our county. Businesses in Staffordshire are represented by the Chamber with member’s views on local, regional, and national issues affecting businesses being raised directly with key decision makers.

Stoke-on-Trent South MP, Jack Brereton, was pleased to sponsor the Chamber’s event in the Houses of Parliament. This gave local business leaders and local organisations the chance to come to Parliament and discuss the main issues affecting businesses today. Attendees were also gifted with the attendance of numerous Staffordshire MPs and two Government Ministers during their visit.

Jack Brereton MP started off the day by treating attendees to tour of the Houses of Parliament. The day started off in the oldest part of the Palace of Westminster in Westminster Hall, built in 1097, and proceeded through the corridors of democracy and power, even right through to the throne. Attendees where gifted in witnessing the Speaker’s procession and the beginning of a new day in the House of Commons.

The first session of the day was joined by the Minister for Small Business, Paul Scully MP. This gave the opportunity to hear first-hand from the minister the work being done by the Government to support small businesses in regions such as Staffordshire. This was then followed by a Q&A session with the minister, giving the attendees the chance to raise their enquiries or concerns. Minister Scully outlined in more detail the Government’s levelling up agenda and how this will benefit local small businesses. Discussions were also had on support being offered to small businesses to cope with the current high costs of energy within the commercial sector.

The Minister for Transport, Andrew Stephenson MP, and numerous Staffordshire MPs carried out a wide range of discussions along with Hannah Essex, Co-Executive of British Chamber of Commerce. The Minister for Transport and MPs spoke about the need for further investment into areas such as Staffordshire and Stoke-on-Trent. Business leaders stressed the need for connectivity across Staffordshire to enable cities like Stoke-on-Trent to widen their business links. Jack Brereton MP outlined numerous ongoing bids to reopen train stations within the city, such as a bid recently submitted to Government for reopening Meir Station and the work being done by local MPs and local authorities to reopen the Stoke-Leek line.

Numerous Government funds have become available to Stoke-on-Trent in the view of levelling up. Late last year Stoke-on-Trent welcomed the news that the city had been successful in securing three levelling up bids worth £56 million. Funding such as this will be vital for local businesses as the city aims to not only recover but grow following the pandemic.

Local opportunities for workers are a key element in supporting and growing local business. Jack Brereton MP and the Chamber of Commerce voiced their support to see cities like Stoke-on-Trent offering local workers the same opportunities as those in larger cities such as London. As well as securing Government investment in redevelopment and transport links, improvements in local infrastructure were raised. Improvements towards the A50/A500 and the need for Stoke-on-Trent to have a clear corridor in and out of the city were discussed amongst MPs and attendees.

Those in attendance stressed the importance of educating students from a young age about the variety of jobs across different business sectors. Removing stereotypes on jobs between men and women from the minds of young people and expanding their ambitions across all fields of employment within businesses was undoubtedly supported by all. Conversations were held on further education with the need to ensure workers can expand and learn new skills during adult life. Having access to these opportunities provides a workforce that can move fluidly between various business sectors and reduces the risk of worker shortages for businesses.

“It was such an honour to be able to welcome the Staffordshire Chambers’ of Commerce, local businesses and organisations into Parliament. We politicians debate and vote on key decisions that affect the way in which businesses can function. To be able to welcome business leaders and members of local organisations into parliament was an absolute pleasure. I am keen to see levelling up in Stoke-on-Trent. This means more support for local workers and also ongoing support for new and existing businesses.

For Stoke-on-Trent to level up and improve, we must ensure that workers have access to jobs within the city. We also must ensure that businesses have the opportunity to trade not only locally but nationally and even internationally. Stoke-on-Trent ceramics are being sold all around the world and I want to see more businesses sectors from our great city spreading their wings.”

“As the voice of local business our policy team works hard to lobby for positive and consistent change for Staffordshire businesses. We would like to thank Jack Brereton, MP for hosting this event and giving our members the opportunity to put forward their case for continued government support as our local businesses continue to navigate their recovery from the pandemic and regroup post-Brexit.”