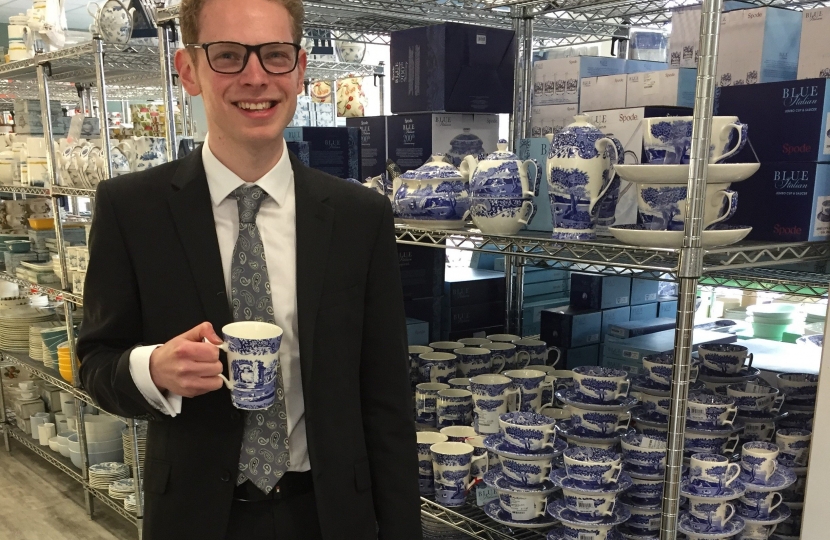 MP for Stoke-on-Trent South Jack Brereton has called a debate in Parliament to urge the Government to support Potteries’ ceramics manufacturers in new trade deals with the rest of the world.  With the UK leaving the EU, Jack said, now is the time to push for free and fair trade at the World Trade Organisation and across the Commonwealth, opening markets with new trade deals for world-class ceramics made in Stoke-on-Trent.  But Jack also gave a warning that some rogue competitors will ignore the rules – and whilst the carrot of free trade should be offered to countries that respect rules-based trade, big sticks should be at hand against rogue competitors who flout international agreements – such as China with its history of ‘dumping’ the unwanted ceramics produced under its skewed state-distorted economy.

“The job now is to embrace the opportunity of Brexit to use Britain’s position as a leading member of the World Trade Organisation (WTO) to push on the international stage for the free and fair trade globally, and the level and fair playing field globally, that we pushed for regionally as a member of the European Union on the smaller stage of the Single Market. Current trade rules have served the ceramics sector well against outrageous dumping by certain countries that have far less regard for the spirit of free trade and the necessary rules underpinning a free market economy.  For example, just ten years ago, we saw huge volumes of ceramic tiles, giftware and tableware – all made in China – being dumped at a price that could not have covered the real cost of production.  The investigations into the price anomalies were so clear-cut as cases of dumping that the EU still imposes remedial duties today – and there are very good reasons for maintaining them after Brexit, not least the fact that since the measures against tile dumping were introduced in 2011, employee numbers here in the UK increased by as much as 40 per cent.”

“Brexit is a great opportunity for us to be a leading independent force in the WTO, the champion of free and fair trade across the world.  It will take time to convince all other members of our case, and in that time we will have to be ready to combat egregious distortions, but the direction of travel should be clear: freer markets, freer trade, an empowered and liberated entrepreneurial British spirit, with more of our world-class manufactured goods reaching global markets, and all of it underpinned by a sense of enforceable fair play.  That is the Brexit that my constituents voted for, and that is direction I hope the minister will be pleased to travel.”

“We are pleased Jack has obtained this debate. We have been raising the profile of this critical issue and its importance for UK manufacturing businesses and jobs for some time.  Our Alliance members are keen to make a success of Brexit .We welcome that there will be an independent UK Trade Remedies Authority. However, we need some changes to the ‘Customs Bill’ to ensure there is a level playing field where overseas manufacturers aren’t playing by the rules. Free trade must not be a free for all.”