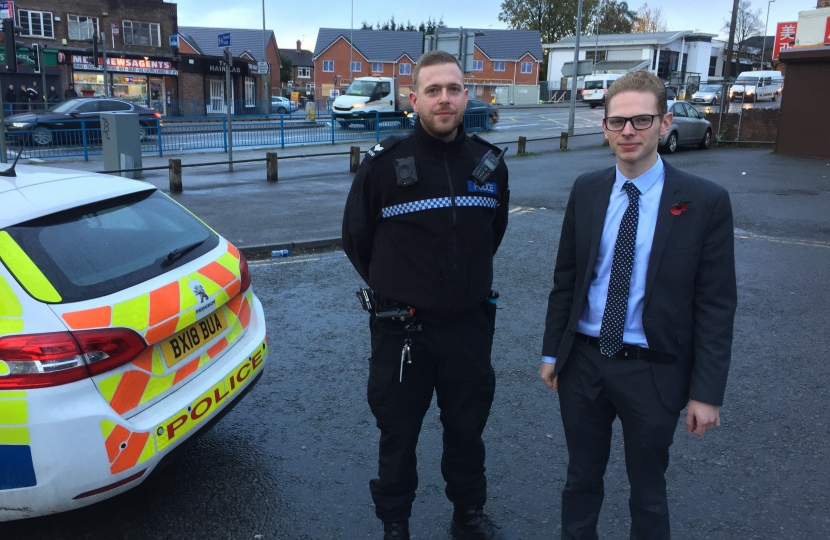 Stoke-on-Trent South MP Jack Brereton has welcomed yesterday’s announcement that funding for the police system will increase by up to £970 million next year, the biggest increase since 2010.

During the autumn, Jack met with both the Home Secretary and Policing Minister Nick Hurd to discuss pressure on policing in Stoke-on-Trent South and to press the Government for greater funding to combat crime and anti-social behaviour.

Police funding in Staffordshire could increase by up to £13.3 million in 2019-20 as a result of changes announced this week.

Jack has also welcomed the Home Office’s commitment to fighting serious and organised crime, including economic crime and drug trafficking, with a £90 million investment in national, regional and local capabilities.

“I am delighted that police funding in Staffordshire and Stoke-on-Trent could increase by up to £13.3m next year.

“This will help ensure that the police have the resources they need to tackle anti-social behaviour and gangs that have blighted our communities, especially in Meir.

“My prime concern is that the local policing that is working to solve issues of great concern locally is strengthened. This week’s police funding announcement provides reassurance that vital community policing will be supported going into the future.”

“This settlement for policing is the result of significant lobbying by Commissioners, parliamentary colleagues in Staffordshire and police services. This wasn’t expected even three months ago and it is welcomed. Whilst helpful, the pressures on policing through increasing demand , the changing nature of crime and the wider security implications police have to deal with, means finances and resources are still exceptionally tight.

“It is absolutely vital the most local policing, which is precious to communities, continues to be supported and in Staffordshire, we build on the extra officers I promised last year, that are now being recruited.

“Plans are progressing well to make significant savings and pragmatic improvements in the new close partnership between the fire and rescue service and police. This will help services meet the necessary demands of the future. Although it’s not going to be easy.”