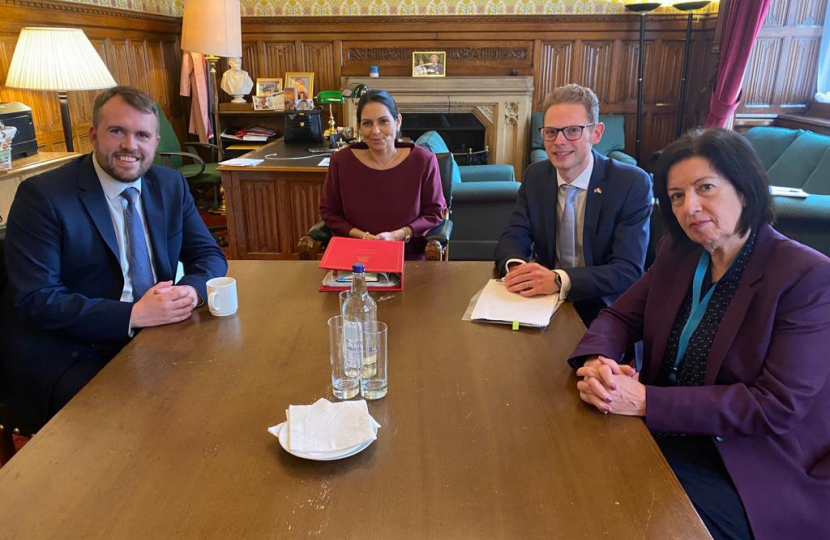 The Home Secretary Priti Patel has signed a world-first partnership with Rwanda, which will see asylum seekers who come to the UK illegal via dangerous Channel crossings relocated to Rwanda.

“Residents repeatedly raise with me their frustration on the ongoing scenes of illegal migrants crossing the channel and entering the country illegally. The UK prides itself as being a country that respects law and order, we have more than almost any other country in Europe to support those genuinely seeking refuge. To enter the UK illegally is frankly an insult to the goodwill of our people and our country.

I am very pleased to see the Government taking action to deter people from entering the UK illegally and put an end to the barbaric people traffickers. If we are to help refugees from countries such as Ukraine, we have to ensure that a proper immigration system is in place.

It was also great to hear the Prime Minister announce that asylum seekers will be fairly spread across local authorities. Stoke-on-Trent has taken far more than its fair share of asylum seekers, one of the highest numbers of refugees resettled in the region and I have stressed many times in the House of Commons the need for other areas to take their fair share.”

Rwanda is a fast-growing economy that is recognised globally for its record on welcoming and integrating migrants–those who submit asylum claims will have their claims processed in Rwanda and will be supported to build a new and prosperous life there.

The new agreement will provide funding to support operations, accommodation and integration, similar to the costs incurred in the UK–helping Rwanda to process asylum claims. The number of people who can be relocated is unlimited and they will have support and care as their claims are considered and a comprehensive integration package for those in need of protection. The Conservative Government are investing an initial £120 million into the economic development of Rwanda as part of their partnership to support Rwanda’s Vision 2050 national strategy.

Since 2015 Conservative Governments have offered a place to over 185,000 men, women, and children seeking refuge. This includes 100,000 British Nationals Overseas from Hong Kong, 20,000 people through the Syrian resettlement scheme, 13,000 people from Afghanistan, and around 50,000 Ukrainians–with no cap on the number eligible to come.

“The global migration crisis and how we tackle illegal migration requires new world-leading solutions. There are an estimated 80 million people displaced in the world and the global approach to asylum and migration is broken.

“Existing approaches have failed and there is no single solution to tackle these problems. Change is needed because people are dying attempting to come to the UK illegally.

“Today I have signed a world leading migration partnership with Rwanda which can see those arriving illegally into the UK by dangerous methods relocated to Rwanda to have their claims for asylum considered and, if recognised as refugees, to build their lives there–helping break the people smugglers’ business model and prevent loss of life.

“I am delivering the first comprehensive overhaul of the asylum system in decades. At the heart of this approach is fairness so that access to the UK asylum system based on need, not ability to pay people smugglers. The demands on the current system, the cost to the taxpayer, and the flagrant abuses are increasing, and the British public have rightly had enough.

“That’s why I am overhauling this broken system, we will continue to support those directly fleeing oppression, persecution and tyranny through safe and legal routes, while deterring illegal entry to the UK and making it easier to remove those from the UK who have no right to be here.”

Operational command over small boats crossings in the English Channel will now be held by the Ministry of Defence and the Royal Navy, supported with £50 million of new funding for new boats, aerial surveillance, and military personnel. This builds on the existing taskforce of patrol vessels, Wildcat helicopters, search and rescue aircraft, drones and remotely piloted aircraft.

The Conservative Government are also setting up a new asylum accommodation centre in Linton-on-Ouse. Currently our broken asylum system costs over £1.5 billion per year and over £4.7 million per day in hotel expenses alone.

The Nationality and Borders Bill will fix the broken asylum system by allowing the Government for the first time to distinguish between people coming here legally and illegally and for this distinction to affect their status in the UK–breaking the cruel business model of vile people smugglers.

Stoke-on-Trent has already resettled one of the highest numbers of refuges in the whole region which has put pressure on housing, schools and medical facilities. New measures will also ensure that those being resettled in the UK are much more fairly dispersed across the country, rather than all the pressure being focussed on just a few local areas.