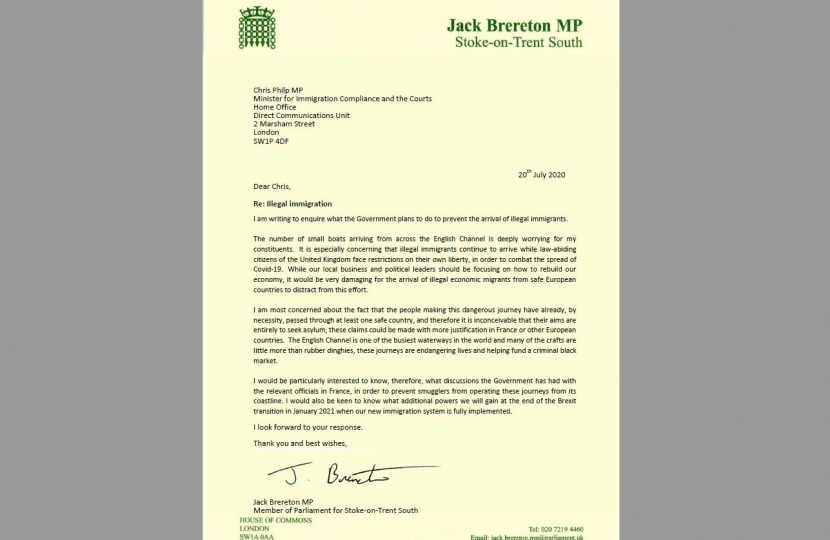 Jack has written to Chris Philp MP, the Minister for Immigration Compliance, to raise his constituents' concerns about the amount of people being illegally smuggled across the English Channel.  The full text of the letter can be found here:

I am writing to enquire what the Government plans to do to prevent the arrival of illegal immigrants.

The number of small boats arriving from across the English Channel is deeply worrying for my constituents.  It is especially concerning that illegal immigrants continue to arrive while law-abiding citizens of the United Kingdom face restrictions on their own liberty, in order to combat the spread of Covid-19.  While our local business and political leaders should be focusing on how to rebuild our economy, it would be very damaging for the arrival of illegal economic migrants from safe European countries to distract from this effort.

I am most concerned about the fact that the people making this dangerous journey have already, by necessity, passed through at least one safe country, and therefore it is inconceivable that their aims are entirely to seek asylum; these claims could be made with more justification in France or other European countries.  The English Channel is one of the busiest waterways in the world and many of the crafts are little more than rubber dinghies, these journeys are endangering lives and helping fund a criminal black market.

I would be particularly interested to know, therefore, what discussions the Government has had with the relevant officials in France, in order to prevent smugglers from operating these journeys from its coastline. I would also be keen to know what additional powers we will gain at the end of the Brexit transition in January 2021 when our new immigration system is fully implemented.

I look forward to your response.

Jack gets out to Longton for year's first Litter Pick

Over the weekend, Jack Brereton MP joined Longton West and Hollybush Councillor Shaun Bennett in the first litter pick of the year, after COVID restrictions were lifted to allow it.