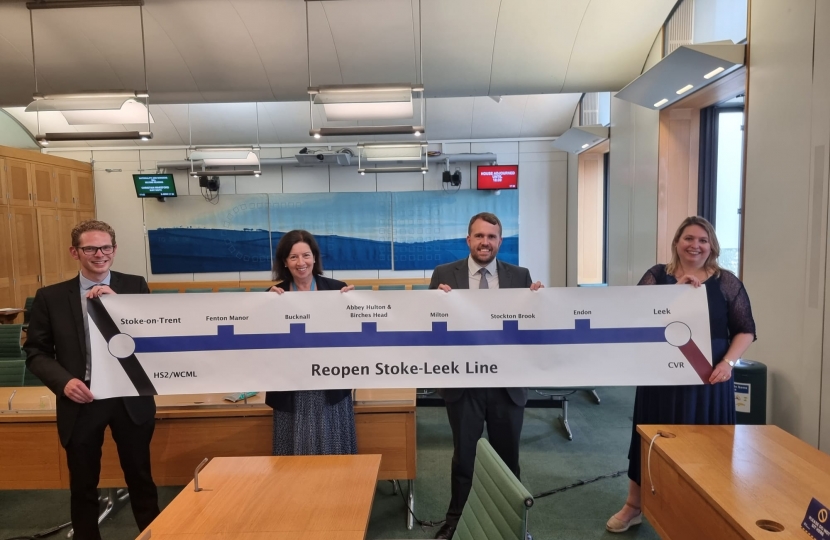 Local Members of Parliament have been lobbying for the reopening of the line for a long time and have had many meetings with Ministers to make sure they know the potential benefits, as well as raising the important issue in the House of Commons on many occasions.

The neighbouring members of Parliament, together with Staffordshire Moorlands District Council and Stoke-on-Trent City Council submitted a bid to the Department for Transport as part of the Restoring Your Railway Fund which was launched by the Department for Transport last year. The bid set out why the line should reopen, and the economic benefits it will bring across North Staffordshire and the Moorlands.

“Some areas of Stoke-on-Trent have up to 40% of households without a car and our roads are increasingly congested. It is vital we see significant improvements locally in both bus and rail so people can better access skills and job opportunities. The reopening of the Stoke-Leek line with a station at Fenton Manor will be a key part of improving our local public transport and making it easier for people to get around.”

“Together with Cllr Sybil Ralphs MBE, I have been lobbying for the reopening the line for a long time. Having a clean, green, reliable train service into the City would benefit so many people in the Moorlands who travel for work and leisure. It would also allow many more to visit our beautiful countryside and attractions without adding to the pressure on our roads and has the potential to take freight off the roads too, benefitting those who live along main roads.”

“Reopening the Stoke to Leek Line alongside stations such as Etruria will ensure the new opportunities we are creating in the city will be accessible to all. The Restoring Your Railways programme will allow us to create a detailed proposal and that is a vital first step.”

“I am grateful to Karen for having secured this really important debate about why North Staffordshire MPs believe the Stoke-Leek line should be reopened. We have worked tirelessly together, submitted a petition to Parliament with over 1000 signatures and put in our bid to the Restoring You Railways fund. I hope our bid is successful. For people in places like Milton and Sneyd Green, there is a clear benefit for the line to reopen. Not only will it mean people could take their car off the road and commute to school, college or work more easily, but it will also increase potential footfall and boost the local economy of our villages like Milton.”

The MPs know there is a great deal of support for this from local people in Stoke and the Moorlands and have pledged to do all they can to make sure that this proposal becomes a reality. This includes highlighting the campaign in Parliament and with Ministers whenever possible and they are all eagerly awaiting the results of the bid which should be announced soon.