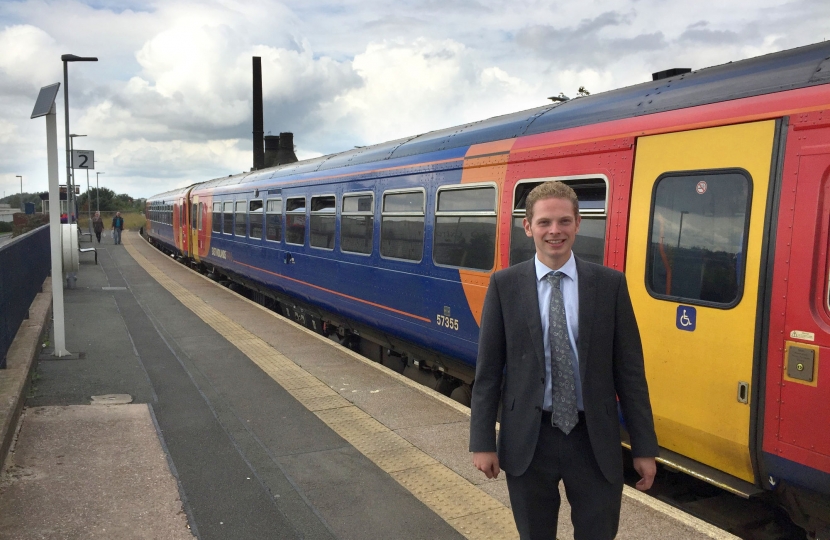 Jack Brereton, Member of Parliament for Stoke-on-Trent South, has welcomed the award of the new East Midlands rail franchise to Dutch operator Abellio.  The new contract, which will come into effect in August, includes enhancements to services particular on the North Staffordshire line between Crewe and Derby, which serves Longton, Stoke-on-Trent, and Kidsgrove stations.

Jack has hailed the new franchise award as a victory for his campaign to improve services from Longton Station. As part of the new deal, trains running through Longton will be upgraded to new models; most services will be extended to Nottingham; services will run later in the evenings in both directions; and an enhanced Sunday service will be provided.

Last year, Jack travelled with Transport Secretary Chris Grayling on the packed commuter service on the line, and the Minister saw first-hand the problems with the limited capacity of the service and the poor quality of the passenger carriages.

“I am delighted that the issues I have raised repeatedly with the Transport Secretary were taken on board when the award of the new franchise was being considered. It is fantastic that better trains and enhanced services are part of the package that has been agreed.  I will be meeting with Abellio later this month to talk about how the new operator can deliver the best possible passenger experience for my constituents and for all passengers on the North Staffordshire line”.

“Improving the experience for passengers is at the heart of this new franchise. Abellio will deliver state-of-the-art new trains, upgraded ticketing systems and improvements to stations. Through zero-carbon pilot schemes, trialling hydrogen fuel cell trains and delivering more seats on modern, spacious trains, the new franchise will also play a major role in building a railway fit for the future.”