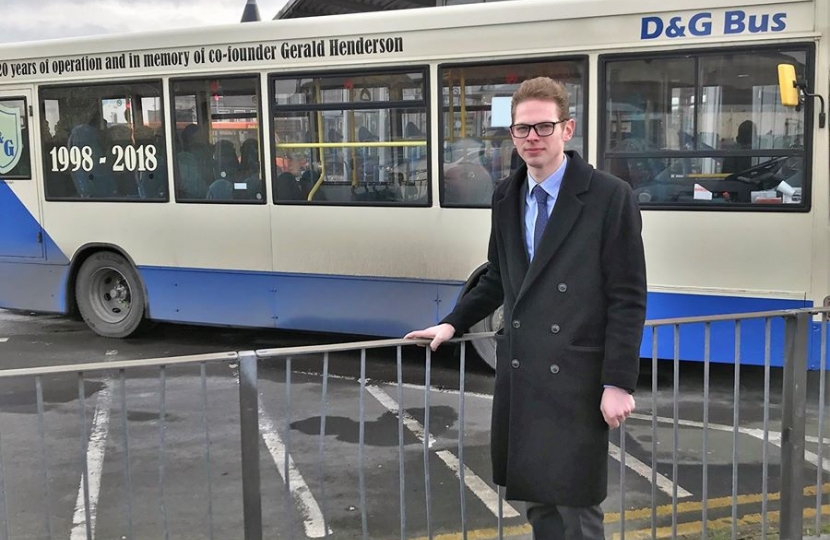 Members of Parliament today debated the future of bus services and public transport in North Staffordshire.  The Debate, held in Westminster Hall, was secured by Jack Brereton, Member of Parliament for Stoke-on-Trent South.

This follows news that bus journeys across Stoke-on-Trent declined by more than ten per cent in the last year: there were one million fewer bus passenger journeys in the area in 2018-19 than in 2017-18.

Following the debate, Jack said, “Poor quality bus services are regularly raised as a major issue locally. Services are just not good enough and I wanted to draw attention to the importance of seeing things improve.

“I hope the Government will take our proposals for improvements seriously and ensure we get the additional investment we need through the Transforming Cities Fund and Superbus bid.”

Speaking in the debate, Jack said, “North Staffordshire’s public transport is quite simply not good enough.

“[What we are proposing] is the Superbus Proposal, with a vision of an attractive, efficient and affordable bus network forming the core of our local public transport. High-frequency, high-priority bus services would operate on a network of cross-city routes, creating a bus-based urban transport system.

“What is envisioned is nothing short of a revolution for road traffic planning in Stoke-on-Trent, with a radical reordering of highway space – and junction prioritisation – in favour of buses.

“Once again, we would be able to boast one of the best and most comprehensive public transport networks, just as we did over a century ago.“

Responding, Nusrat Ghani said, “The Government is investing £2.5 billion in supporting the development of new and innovative public transport schemes which will improve journeys and tackle congestion in some of England’s largest cities.”

“We are moving in the right direction.  We are making sure that public transport is absolutely key.  The Government is committed to levelling-up, making sure that there is equal access to services and employment, and that requires good public buses at the heart of all transport and town and cities planning.”