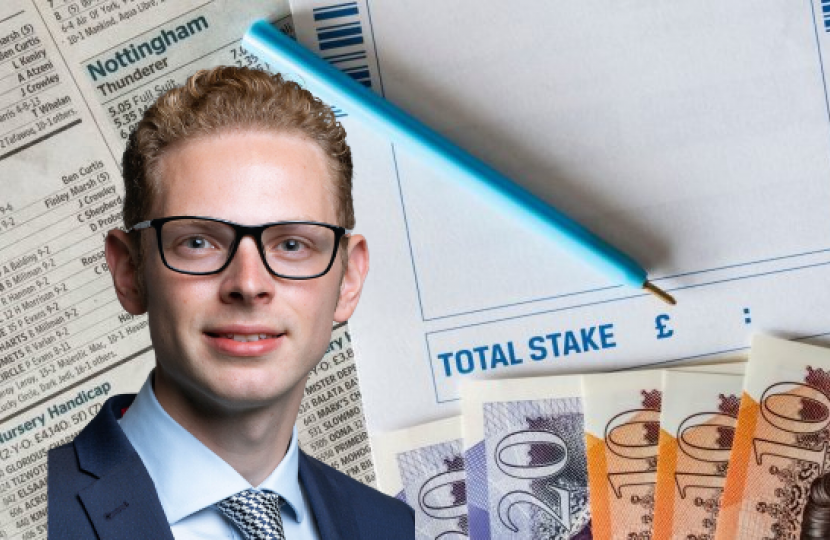 With reform to the betting and gaming industry having the potential to impact the lives of millions in this country, we need to give it the attention it deserves.

Politics on the national stage is always a high-octane drama, and the last few weeks have certainly lived up to that billing. Against the backdrop of a Prime Ministerial resignation and new leadership contest, the Government has wisely committed to not announcing any new legislation or new policy in the coming weeks. However, one exception appears to be the Gambling White Paper, with some still calling it for it to be published.

To rush this now would be a mistake.  There are very significant legislative changes and large number of new policy proposals to betting and gaming which should give Ministers pause for thought.

Every month some 22.5 million adults have a wager, whether that’s on horse racing, playing the lottery, bingo or casino games, or having a bet on the football and other sports. It is of course true that the industry should remain current, but we must get this right.  Reforms to the betting and gaming industry will impact a hobby that people enjoy, thousands of people employed in the industry and the financial future of the many British sports that depend on this industry. And if it’s a priority for them – it should be a priority for the Government.

It’s very easy to hold lazy stereotypes about the regulated betting and gaming industry. But as a Stoke-on-Trent MP, I am fortunate to see first-hand the contribution this sector is making right now as a leisure industry that is part of the cultural fabric of this country.

Stoke-on-Trent is renowned for its entrepreneurial spirit, industrial staples like ceramics are increasingly sitting alongside new age tech and games design. Tech firms like bet365, in Stoke-on-Trent, are world leaders in their field, supporting thousands of high-skill jobs in the region.

In Stoke-on-Trent alone, betting and gaming employs around 4,500 people and contributes £390 million to the local economy. As well as bet365, the West Midlands is home to betting and gaming firms providing high tech jobs, like Inspired Gaming, Gamesys and Intouch gaming among others, employing and investing outside the capital and big cities. This isn’t a party-political slogan – this is genuine real world levelling up in action, providing vital skilled employment.

The regulated betting and gaming industry isn’t just building tech power houses in places like Stoke-on-Trent, it is playing a vital part in the hospitality and tourism sector through casinos and on our hard-pressed high streets thanks to bookies. Combined, those endeavours support 119,000 jobs, contribute £7.7bn to the UK economy, while generating £4.5bn for the Treasury.

Of course, I don’t support growth at any cost; it has to be sustainable and responsible. Betting firms must stay the course when it comes to tackling problem gambling and many like bet365 are leading in the industry when it comes to best practice reforms.

Problem gambling rates in the UK are amongst the lowest in Europe and continue to fall, now standing at 0.2%, according to the independent industry regulator. That doesn’t mean there’s room for complacency. But betting firms do deserve credit for the millions of pounds they have invested in tackling problem gambling through research, education and treatment (RET) provision. The promise of a further £100 million uplift from some of the industry’s biggest operators, including bet365, is a sign that the industry really does take this issue seriously.

If reports on the White Paper are to be believed, ministers have decided against calls for a Statutory Levy, essentially a new tax, to replace this voluntary mechanism which currently funds a third sector providing over 90 per cent of the treatment and prevention work to tackle problem gambling in the UK. This is welcome, the current system works and it doesn’t need a new arrangement.

But other reports are more concerning. Punters were promised targeted affordability checks to prevent those losing ‘thousands’, but it is suggested those checks could be applied at a far lower point, compelling weekend punters to provide private financial details to prove they can afford to bet. Instead of protecting punters, this could push them to an increasingly predatory unregulated black-market, where the numbers of customers has swelled to the hundreds of thousands and the amount bet is now in the billions.

Meanwhile, it is feared a relaxation of regulations for bricks and mortar casinos, allowing them to compete with online operators by lifting the cap on electronic slots, will be denied to around 70 of the UK’s 121 casinos, because they are deemed too small.

The Government promised to protect punters and Level Up, neither of these suggestions match that ambition. If that is the case, then as with all other big decisions for Government we should pause the White Paper until we have a new PM and a new cabinet. Important policies impacting the lives of millions cannot be rushed through haphazardly.

The Government has a choice in the coming weeks. Whatever twists and turns come in the storyline of Britain’s political life, this crucial issue affecting millions, must never become a sideshow. Betting and Gaming, its customers and all those who work in the industry deserve better.