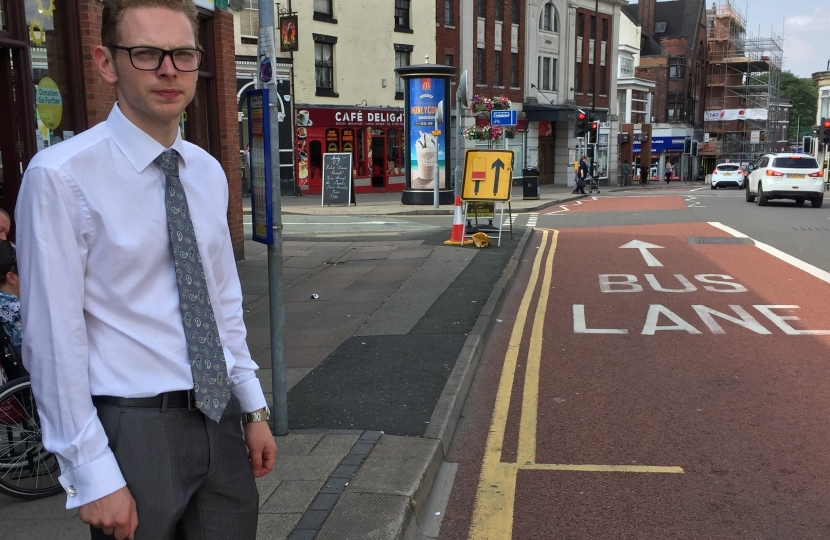 What do you think of our local buses?

We all know the state of our public transport in Stoke-on-Trent is just not good enough. First Bus has cut many routes in recent years, and there does not seem much hope of any improvement in provision. It is positive that some routes have been picked up by smaller operators but they do not have the capacity to replace all the services that have disappeared or shrunk.

Numerous constituents have contacted me about local bus services and some of the stories people have told me are just farcical. None more so than the dozens of people forced to wait every day on Market Street since services were removed from Longton Interchange. People have been left in the cold and wet without any shelter, just to save a couple of minutes. Many have also complained that the last services in the evening are now too early for them to get home from work. For example, the last bus leaving Trentham Lakes departs 15 minutes before the end of nearby workers’ shifts. In other areas like Lightwood, the community no longer has any service at all. It is totally unacceptable in an urban area to have communities without any service, leaving many vulnerable people stranded and isolated.

I am pleased a large number of my constituents have also recently replied to my survey about how we can improve local bus services. Many of the services that still exist no longer effectively serve the places people want to go and there is a desperate need to rethink how local bus services are provided. Despite Stoke-on-Trent being made up of six towns as well as numerous other communities in and beyond the city, there seems an unreasonable obsession with running all services into Hanley. There needs to be a refocus on providing services people want and will use, and it must be recognised that the places people wanted to go to 50 years ago are not always the same today.

It is not only bus users who are being disadvantages by reduced services but everyone using our roads. This will only make our roads even more congested, full of people in cars who would like to use the bus but cannot. Just think, if 5% of people left the car at home and got the bus instead this would have huge impact on reducing congestion, not to mention the benefits of reducing air pollution. There are enough people in Stoke-on-Trent who want to use public transport to create a full network of services to link up the whole city.

To attract a broader range of passengers, buses need to not only provide effective services people want to use but also make it easy, comfortable and appealing for people to use public transport. Communicating effectively with passengers is a critical part of this, but First Potteries don’t even have a proper Facebook page.

There must be a better way, and that is why I am wholeheartedly supporting my Conservative colleagues at the City Council in their campaign to franchise bus services. Our local communities know exactly where they want bus services to be run, and where most people are likely to use them. And the more people using our buses, the more attractive it is to run more routes, with better services at evenings and weekends. This would give the City Council the power to set the routes and fares for our bus services. It would also result in much closer working between the operating companies and the local council to ensure we see effective and focused investment on improving services.

We do not deserve a second-rate public transport system in Stoke-on-Trent. I am pleased that the Government has recognised this and has granted us tens of millions of pounds to improve local transport through the Transforming Cities Fund. This will particularly see improvements around Stoke Station to better join up public transport from the station to the rest of the city. The council has also, under Conservative control, invested more money into road repairs than ever before, ensuring potholes are kept at bay.

We want to go much further, and I hope that after the local elections on 2nd May, a Conservative-controlled council can get on with the job of taking back control of our bus services. Moving public transport in our city from a position of terminal decline to one of continual improvement.

This article appeared originally in The Sentinel, 11th March 2019.