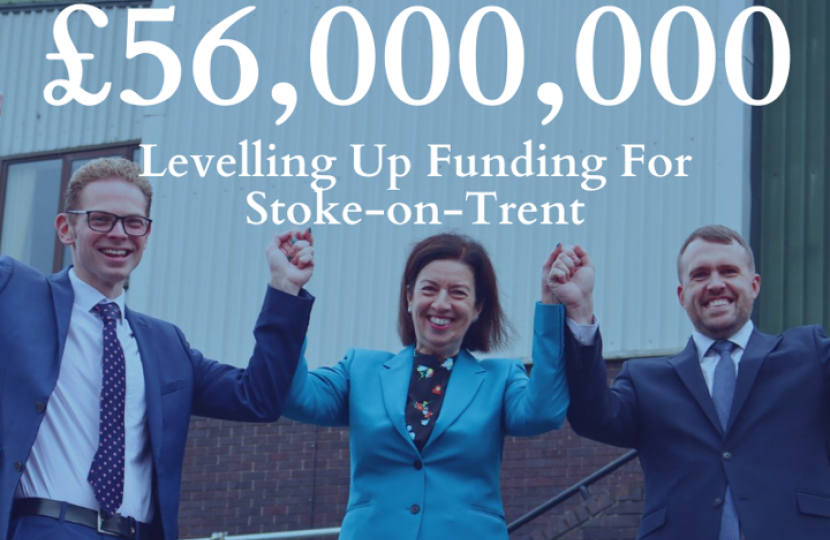 Earlier this year, three bids worth £56 million were submitted to the Government as part of the Government’s ‘Levelling up Fund’.

The bids submitted to the Government’s ‘Levelling up Fund’ include:

- £20 million towards the City Centre Regeneration Area, centred on the old Hanley bus station and the East-West Precinct.

- £16 million towards the comprehensive redevelopment of Swift House, behind Stoke Rail Station.

- £20 million securing the regeneration of key heritage buildings across the city, including the Crown Works site, the former Tams Factory in Longton.

The regeneration projects included in this latest round of bids will pay for themselves many times over in jobs, new homes, new businesses, and investment they will stimulate.

“For far too long we have not received our fair share of investment and attention from Government. But now thanks to the hard work of our MPs and City Council team, working together we are finally securing the investment we deserve.

A lot of hard work has gone into making the bids a reality. I have been working tirelessly with colleagues in both Stoke-on-Trent and Westminster to ensure that the Government hears our voices. This investment into our city will help us level up opportunities on a scale we have never seen before, creating the jobs and homes we need. It will redevelop derelict sites across Stoke-on-Trent for new uses, including the Crown Works in Longton. The hard work to deliver on these projects and make this a success for my constituents starts now.”

"Jack, Jonathan and I work together constantly as three Stoke-on-Trent Conservative Members of Parliament together with Abi leading the Conservative Council to deliver for our city as a whole. Stoke-on-Trent’s motto “Vis Unita Fortior” means “United Strength is Stronger”, and today’s announcement by the Chancellor of £56 Million for our three regeneration bids is testament to our collective impact at Westminster.

We have already brought significant investment to the city in extra funding for education, health, skills, welfare and safety, and this massive boost to our regeneration plans shows that our message is landing and investment in the transformation of Stoke-on-Trent is recognised as essential to the Government’s Levelling Up agenda.

Stoke-on-Trent is a city of six towns, but our future success relies on developing the city centre in Hanley, and investing around the mainline station. I would like to thank Jonathan and Jack for supporting the two Central projects for the Goods Yard site and the City Centre regeneration area as they benefit residents across the city by providing new jobs, homes and investment into our local economy. The third bid enables projects in Stoke (on the Spode Works site), Tunstall and Longton.

We are all thrilled to have secured all three bids for the City, and I am confident that the winning formula we have as a united Stoke-on-Trent team will see more successes going forward.”

“Jack, Jo, Abi and I knew in 2019 people across Stoke-on-Trent lent us their votes because they wanted to see change. Having worked to secure £29 million from the Transforming Cities Fund, created 550 new jobs with the Home Office making Stoke-on-Trent their second home and now over £55 million to help regenerate our city, we can proudly say Stoke-on-Trent is no longer forgotten.

The £3.5 million for Tunstall Library and Baths will create new high quality homes whilst also protecting our city’s heritage for the future. It will also build on the investment from Stoke-on-Trent City Council, who are refurbishing and rejuvenating Tunstall Town Hall.

“This is a great step forward in our efforts to level up Stoke-on-Trent. Our focus must be on improving our area and delivering for our residents. Stoke-on-Trent has felt ignored for so long and this Government investment is not just going to be a financial benefit to our city, but a renewed feeling of hope for the future.”

I was pleased to lead a debate in Parliament’s Westminster Hall last week to highlight the real challenges faced by energy intensive industries.