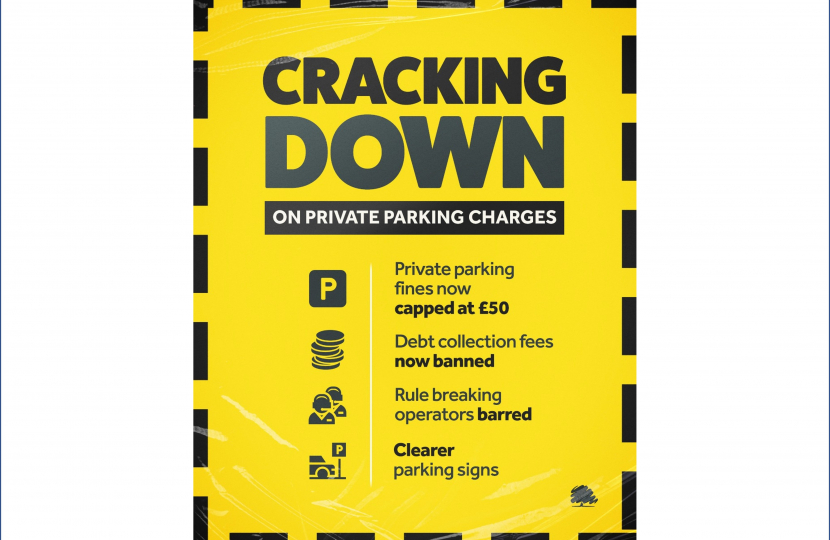 Under the new rules being introduced by the Government, most fines will be capped at £50. This is down from the current £100 cap in place. Private parking firms must also give a 50% discount to those who pay their fine within 14 days and, drivers will also benefit from easier appeals processes should they be issued a fine they feel is unfair.  There will also be new requirements for improved signage. This brings private car parking rules in line with those on Council car parks.

Locally, residents in Stoke-on-Trent understand the pain of receiving private parking charge notices all too well. Over the last year, Jack Brereton MP has been contacted by a large number of residents who received fines after parking in the shared Matalan and Sports Direct car park in Longton. Since then, Jack has been campaigning tirelessly to see car parking charges cancelled and has met with both ministers and officials to call for these changes.

Jack Brereton MP has been pushed for the cancellation of unfair private parking charges received by residents. Jack has stated that the change in parking signage, along with the new signage not being clear enough, has meant that numerous residents were unfairly fined. It was announced just before Christmas that following Jack’s intervention, over £7,000 worth of parking charge notices were cancelled. Jack is continuing to work to ensure all G24 fines issued unfairly are cancelled or refunded.

Due to local first-hand experience encountered in Stoke-on-Trent, Jack Brereton MP has welcomed the latest Government announcement. The plans will mean that:

“Locally, numerous residents and I have experienced first-hand the issues faced due to unfair private parking charge notices. My office has been inundated over the last year with concerned residents who have been wrongly penalised by G24. I have been working to raise these matters with Government ministers and to call for a wider toughening up of the rules for private parking firms so this can’t happen again.

It is so important that we ensure drivers are not taken advantage of and I am very pleased to see a clamp down on parking cowboys. Given the distress caused to so many people locally, there was a clear need for some very big changes to be made and the Government’s recognition of the needed changes will be welcome news to many drivers in Stoke-on-Trent.”

“The new Code of Practice will set out a clear vision with the interests of safe motorists at its heart, while cracking down on the worst offenders who put other people in danger and hinder our emergency services from carrying out their duties.”