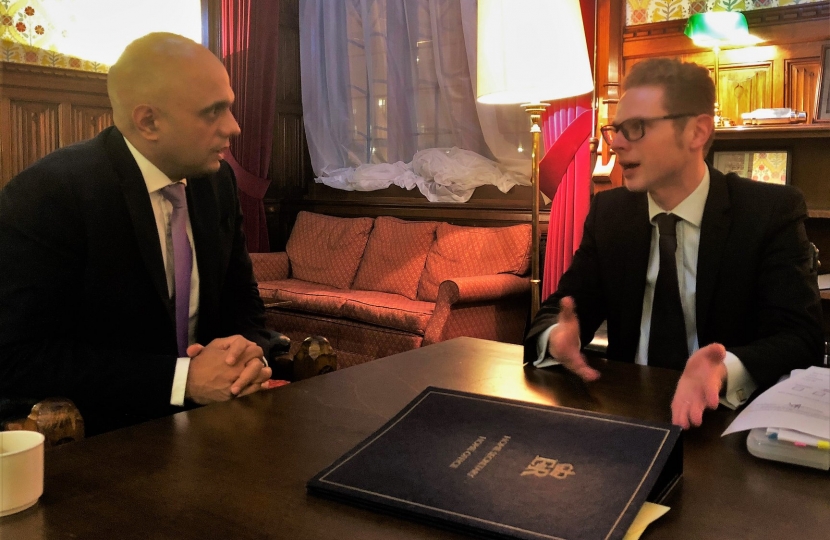 Stoke-on-Trent South MP Jack Brereton has taken his campaign against novel psychoactive substances to the Home Office.  He met with the Home Secretary, Sajid Javid, to call for the urgent reclassification of ‘monkey dust’ to mitigate the devastating impact the drug is having on users and local communities across Stoke-on-Trent.

Jack’s meeting with the Home Secretary follows calls from Staffordshire Police, Fire and Crime Commissioner Matthew Ellis for the upgrade of these drugs, known as novel psychoactive substances, to Class A in order to cut off supply, limit availability, drive up cost and increase the consequences for dealers.

Speaking after the meeting, Jack said:

“Monkey dust ruins lives and blights our city. In November I spoke in Parliament about the impact synthetic drugs like monkey dust and spice are having: I will continue to push for harsh penalties for dealers.

“These horrific drugs are currently far too widely available in Stoke-on-Trent, with some reporting monkey dust can be bought for as little as £2.00. These drugs can impact appallingly on users, with some dying immediately from using the drug.”

Whilst meeting the Home Secretary, Jack also raised the importance of taking further action locally to tackle anti-social behaviour and youth violence. He stressed the importance of Staffordshire Police having sufficient resource to tackle the growing number of incidents experienced over the last twelve months.

“The Government has listened to concerns from the police about rising demand and we have proposed the biggest increase in police funding since 2010.

“We are confident that the new settlement, which delivers up to £970m of additional public investment into policing in 2019/20, will help the police continue to recruit more officers. It is also crucial to stop crime happening in the first place. This is why our Serious Violence Strategy emphasises intervening early to prevent young people from being drawn into a life of crime.”

“It is totally unacceptable for people to be intimidated by anti-social behaviour in their own community. I am pleased to see Staffordshire Police, the City Council and others ramping up efforts to tackle these issues in communities like Meir and Fenton.

“Additional resources for our local police will ensure they are able to do much more to get on top of these concerns and ensure preventative work is put in place so young people are not lured into gangs in the future.”