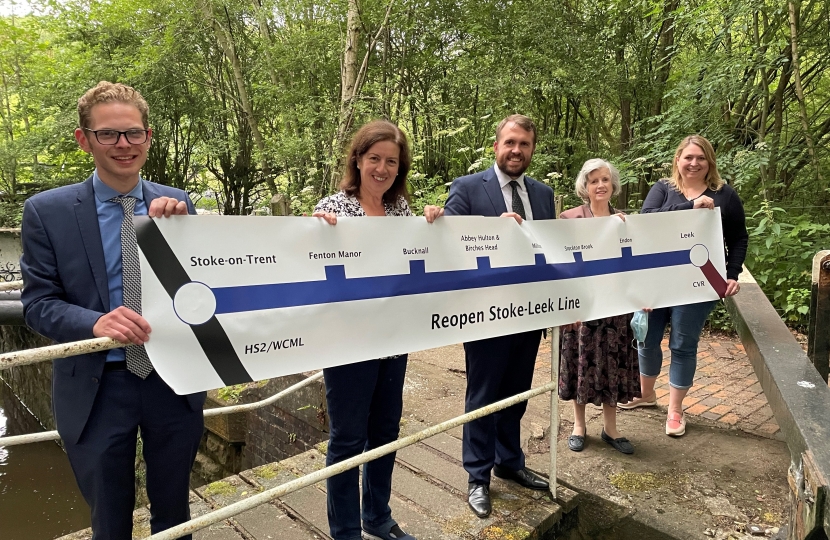 Four North Staffordshire MPs have met along the route of the former Stoke-Leek railway line as part of their continuing campaign to reopen the line for new services in each of their constituencies.  The meeting follows a petition of over a thousand residents in Stoke-on-Trent and Staffordshire Moorlands, in support of a bid to the Government's Restoring Your Railways Fund.

The bid is back by Stoke-on-Trent City Council, Staffordshire Moorlands District Council and Staffordshire County Council, as well as a range of businesses and organisations along the route. It would see funding allocated to draw up concrete plans for the reopening of the line. The MPs hope that the huge public support received since the bid was submitted earlier this year will secure the allocation of funds to develop the proposal.

“This is the latest step in our fight to reopen the Stoke-Leek line.  It is vital that we secure Government support for this and other rail improvements, to massively improve public transport in North Staffordshire.  As part of the proposals, I am campaigning for a station at Fenton Manor, which would join up the communities I represent and help ease congestion on our local roads, improving air quality for everyone.”

MPs will on Tuesday (20th July) hear a Parliamentary debate called by Karen Bradley MP, who will urge the Government to respond positively to the bid.

A final decision on the 'Restoring Your Railways' bid is expected in the Summer.