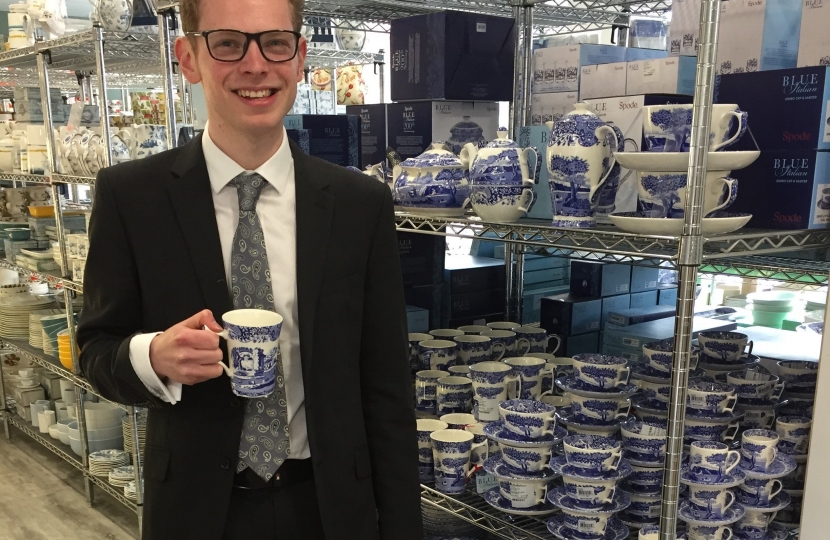 Member of Parliament for Stoke-on-Trent South, Jack Brereton, has today welcomed assurances from the Government that local manufacturers in the Potteries will not lose out to unfair trade practices when the UK leaves the European Union.

The ceramics industry has for a number of years faced problems from countries like China that dump large quantities of cheap tiles and crockery on the world market.  There has been concern that the way dumping is calculated might be worked round by unscrupulous rogue nations which manipulate the normal market pricing mechanism.  Jack has secured promises that this won’t be allowed to happen.

The Trade Minister had clarified where there is difficulty in determining normal value in the presence of state distortions provision should be made for cases where it is not appropriate to use the domestic price of that country. They would instead establish an accepted normal value that takes into account the level of subsidy that has artificially lowered costs of production.

Following Jack’s work lobbying Ministers, the Government have now made significant amendments to the Customs Bill to address concerns of manufacturers. This will give the ceramics industry the legal certainty and confidence it needs to invest further in Stoke-on-Trent.

Following his speech in the House of Commons debate on the Customs Bill, Jack said:

“I am delighted that the Government has listened to concerns of local ceramics companies and made clear they will put in place robust measures to resist unfair dumping of foreign ceramic products into the UK market. It is not right that British businesses should fear these underhand practices that threaten local jobs in Stoke-on-Trent.

“I am especially delighted that the Government has listened to the arguments I have made over the last year, to secure clarifying amendments on trade remedies that will deliver the right Brexit for the ceramics sector, for wider manufacturing industry, and, most importantly, for our workforce in Stoke-on-Trent.”

“Stoke-on-Trent's ceramics industry has been going from strength to strength in recent years, however the threat of cheap imported products flooding the UK market was a concern for many. The improvements to this legislation are very welcome, and will help to give our brilliant local businesses the confidence to continue to invest in Stoke-on-Trent, the World Capital of Ceramics, creating more skilled jobs and making our communities more properties.”